Warning: count(): Parameter must be an array or an object that implements Countable in /nfs/c11/h04/mnt/192782/domains/travellersquarrel.com/html/wp-content/themes/blackandwhite/meta/init.php on line 746
 Puerto Vallarta Airport Travel Tips - Travellers Quarrel

Now if you are like us and will be coming and going from the airport often and don’t have a car and want to greet your family and friends at the airport then saving money on the taxis you leave the airport is well worth it! (If you have a shit ton of luggage and don’t think a few of you can simply walk it across the road then pay double and wait in line outside the exit doors)

When referencing arriving at Puerto Vallarta most people describe it as the tunnel of death or a cattle run..

when in essence it is if you have never been to a different country than your own – however compared to a lot of other countries those asking if you need a taxi aren’t going to just take over your stuff and be physically aggressive by insisting that you use their service.

To avoid the unknown of which company to take, how much it will cost you – yes there are signs but what they don’t tell you until you are at the front of the line already loading your luggage

into the back of the taxi that there is an extra 150 – 200 pesos fee for the airport OR for more than 3 people.

So that isn’t that much money to be losing in the short term only if you are not trying to save money while living in Mexico. Knowing that the extra hundred could be dinner later or treating your new guests to a couple of drinks.

It is so simple to just walk over the bridge – super safe. There is an amazing Fish Burrito place (the burritos are huge so beware if only a few of you are starving) that you can stop and grab a quick bite to eat if you have a 30 – 45 min drive to your place in Nuevo Vallarta, Bucerias or even farther to Sayulita.

We have left the airport over 4 times in the couple of months we have been here and average price from the normal taxi line has been 450 – 500 pesos going to Nuevo Vallarta so to Bucerias I’d an extra 100 pesos and further to Sayulita 300 pesos.

From the taxis that are nicely waiting for you on the other side of the highway you’ll spend about 200 pesos to about midway in the Hotel Zone in Nuevo Vallarta (sometimes thats all you get charged even to the last one on the strip Villa La Estancia) 300 to Bucerias (again depending on where you are and if you leave a 20-30 pesos tip for the driver – not necessary but depending on your driver you decide most are not expecting a tip and are very grateful when given one) getting to Sayulita I’d say 600 pesos to 700 pesos if you give your guy a little extra which when traveling that far you are saving 300 – 400 pesos.

If you think about it most taxis from your condo/hotel if you don’t have free shuttle service back to the airport is 145 – 180 depending on where you are. So to be charged so much leaving the airport seems silly doesn’t it? 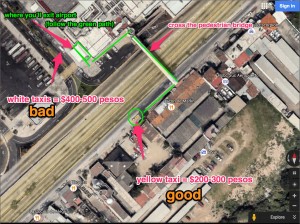 Warning: count(): Parameter must be an array or an object that implements Countable in /nfs/c11/h04/mnt/192782/domains/travellersquarrel.com/html/wp-includes/class-wp-comment-query.php on line 399

Get Some Books for Your Travels